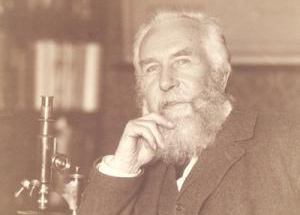 Ernst Haeckel, a member of the German Academy of Sciences Leopoldina who had already been awarded its gold Cothenius Medal at 30 years of age, was one of the most well-known as well as controversial scientists of the 19th century. Even today, the final appraisal of his scientific and cultural importance remains an open question. The publication of his letters is a long-term project of the Union of German Academies of Sciences and Humanities that is projected to last for 25 years; it will greatly profit from the utilization of what is one of the most comprehensive and important collections of source material pertaining to the history of the life sciences.

Haeckel is more responsible than anyone else outside the UK for propagating and spreading Charles Darwin’s theory of evolution. In addition, during the 1870s and beyond he played a crucial role in shaping the way that modern science was made readily understandable to the population at large. Around 1900 Haeckel became ensnared in the debates over social Darwinism and the establishment of eugenics and was at the forefront of discussions concerning a new aesthetic that could indeed be based on the natural sciences. His proposed natural aesthetic had a direct, immediate and comprehensive affect on the stylistic idiom of Art Nouveau and similarly influenced the newly created image of nature appearing in the literary realm at the turn of the century. This affect, it should be noted, was not limited to the German speaking areas of Europe but also included large parts of Eastern Europe, the Latin countries and non-European areas.

Ernst Haeckel´s extraordinarily comprehensive and broadly diversified correspondence, which until now has only been published in small extracts or partial editions, represents one of the most significant conglomerates of source materials for the history of 19th and early 20th century life sciences. It documents in a very unique way the scientific, cultural and ideological impact of Haeckel´s work. It encompasses commentary on Haeckel´s publications and statements about his research work, while also including material concerning his travels and his network of scientific, cultural, journalistic and political contacts.

At the same time, his correspondence provides an insight into Haeckel´s extensive efforts to ideologically embed and popularize Darwin’s theory of evolution and, beyond that, to foster the fundamental thought processes inherent to the natural sciences. His correspondence thus represents one of the most important sources of material dealing with the popularization of the natural sciences around the 1900s.

The publication of the letters written and received by Ernst Haeckel, both in the form of an online presentation of the entire collection and as an edition of 25 themed volumes of selected letters from the Haeckel correspondence, is of central importance to those in the society whose interests include specialized branches of science, popular science or culture. As a result of the project, not only will the extensive inventory collected and housed in the Ernst Haeckel archive be made accessible (mainly the family correspondence as well as letters written to Haeckel), but also letters that were sent to people from around the globe.

Ernst-Haeckel-Haus at the University of Jena (German)