Perception and Control: Sensory systems in biology and engineering 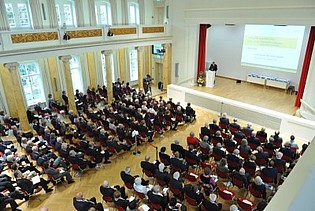 The connection between perception and control is a fundamental principle in the development of life and in the way our lives are shaped. This significance of sensory systems in various areas of life will be illuminated from various perspectives at the 2014 Annual Assembly of the Leopoldina.

Targeted interaction with other living beings and with the non-living world are controlled exclusively by an organism’s sensory systems, which are able to perceive and process chemical and physical stimuli. Sensory impressions – such as visual, acoustic or tactile impressions – influence our behaviour and our emotional world; they play a role in the generation of fear, joy, affection and disgust. In addition, living beings have sensors that are closely linked with basic bodily functions and control blood pressure, hunger, thirst and libido, but can also create dependencies, such as, in humans, computer game addiction.

In human beings, specific complex aesthetic, musical and artistic sensations and our perceptions of form and beauty arise from the processing of sensory impressions in the cerebral cortex and their connections with previously experienced sensory associations.

In a similar fashion, technical sensors have conquered the modern world and control many functions of our everyday lives. In electronic communication, particular demands are placed on our sensory systems and their interaction with technology. In this context, our perception itself is influenced by technology.

Perception and control are also a basic element of modern developmental biology and medical therapeutic concepts. One example is the development of active prostheses and functionalised implants that interact with patients’ bodily tissue. In the context of such medical applications, the connection between perception and control makes it necessary to systematically analyse where the limits are of what is feasible and what is desirable.