The mystery of risks - How can science help reconcile perception and assessment? 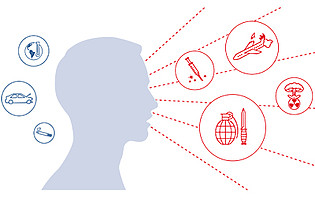 Conference within the event series “Crossing Boundaries in Science” (CBiS)

The aim of the international conference series Crossing Boundaries in Science, held by the National Academy of Sciences Leopoldina, is to act early to identify research areas whose development relies particularly heavily on interdisciplinary collaboration. The second conference in the series was held from 4 to 6 July in Potsdam under the title “The mystery of risks – How can science help reconcile perception and assessment?”. The central question was the role science plays in the evaluation of societal risks and of potential paths of action.

In the run-up to the event, the Joint Committee on the Handling of Security-Relevant Research   organised the workshop “Risk Governance and the Role of Science and Humanities,” which prepared students from Germany, Austria, Belgium, China and the United Kingdom for the conference topics. It also familiarised them with the problem of how science handles security-relevant research risks. One focus of the conference was the question of how risks and perceptions of risks are constructed. Participants also explored whether the precautionary principle restricts scientific progress. And scientists from disciplines such as sociology, economics, psychology, medicine, meteorology and biology discussed the positive and negative effects that may be associated with inaccurate risk perception.

In the opening keynote speech, Prof. Dr. Ortwin Renn ML sketched out various classes of risks, which the subsequent speakers frequently returned to – natural dangers, cybersecurity and health risks. Some of the talks were dedicated to the underestimated and overestimated risks he mentioned. The speakers argued that risks are primarily a social construct rooted more in feelings than in evidence, which is why people generally see terrorism as being more dangerous than a car accident. The role of science is to recognise these perceptions while also explaining the real risk potentials in a clear and reasonable manner.

The event is open for everyone interested. Admission is free of charge. Registration is mandatory. Please register until 28 June 2019 via the following link.