The Power of Science in Times of Change 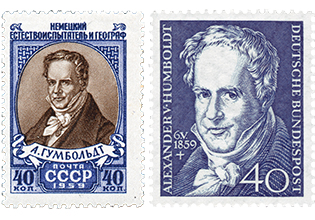 Do we need a Humboldtian esprit in order to understand the world properly?

The expedition of Alexander von Humboldt in the Russian Empire took him in 1829 from St Petersburg to the Ural and Altai Mountains, to the border with China, to Central Asia, to the Caspian Sea and along the river Volga. The scientific findings of this journey led to the book “Asie Centrale”, published in 1844 and which set the pace for the further exploration of Eurasia and Central Asia. Humboldt’s discoveries in geology contributed to the identification of the raw materials in the southern Urals, which served as the basis for the industrialisation of the region. Tsar Nicholas I of Russia found words of appraisal for Humboldt’s undertaking: “Your arrival in Russia caused an unprecedented rise throughout the country; you bring life to every place you visit”. Humboldt received membership of the most important scholarly societies of his time, including the membership of the Leopoldina and the honorary membership of the Russian Academy of Sciences.

The event seeks to build a bridge between the historic and contemporary exploration of Eurasia and Central Asia. Various lectures will highlight current research topics along the historical route Humboldt’s Russian Expedition. Subsequently, experts will discuss the situation and perspectives for the science systems of Germany, Russia and Central Asia: Can we find a heritage of Humboldt’s Esprit in today’s science? How does science convey its expertise to the public? How can higher education, research and innovation shape the development of a country or region? What factual and soft power does science have?

We cordially invite you to the festive event!

Registration by 7 May 2019 is compulsory. Due to the limited number of available seats, you will be informed by 10 May 2019, whether your participation at the festive event and at the reception in the Russian Embassy Berlin is possible. Please follow the instructions of the confirmation e-mail.

The event is will take place in German and Russian with simultaneous translation. Participation is free of charge.