Towards Health: Equality, Responsibility and Research 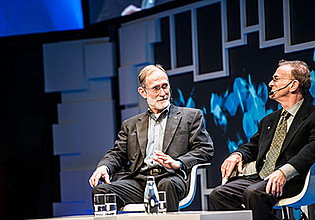 “Towards Health: Equality, Responsibility and Research“ is the title of the first Nobel Prize Dialogue to be held in Germany. Five Nobel Laureates and further experts discuss the future of health, healthcare and research.

How many healthy years do we have over the life course? What do innovations contribute to quality of life? This is not only a medical question or a matter of the healthcare system. Experts will discuss how education, work, environment and inequality relate to health.

Edvard Moser is a neuroscientist. He became known for his work on spatial orientation and spatial memory in mammals. The Stanford economist Alvin Roth will discuss the exchange model which he developed for living-donor kidney transplantation. This model aims to help alleviate the shortage of donor organs. Tomas Lindahl is a biochemist. His discovery that repair mechanisms of the DNA carrier exist has contributed to the development of anti-cancer drugs. The molecular biologist Peter Agre has focused his research on the fight against malaria. This deadly infectious disease is a major problem in Africa and could once again spread further northward as a result of climate change. Kristie Ebi will also be discussing climate change, specifically its harmful effects on human health.

Simultaneous translation into German will be provided.

The event is open to everyone interested. Participation is free of charge. Registration is mandatory.