Guided Tours of the Main Building and the Archive 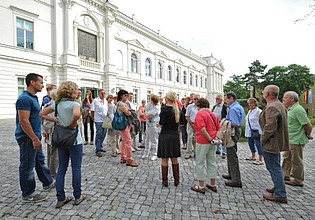 The National Academy of Sciences Leopoldina offers public guided tours on the history of art and architecture at its headquarters on the Jägerberg in Halle. Furthermore, the history of the Leopoldina is explained to visitors of the Academy archive at Emil-Abderhalden-Straße, based on selected archival material. You will find dates for the guided tours of the main building and the archive here.

Guided Tours of the Main Building

The Leopoldina offers public guided tours on the history of art and architecture at its headquarters on the Jägerberg in Halle. The former lodge house, built in the 1820s and reconstructed several times, was last used by the Martin Luther University. After several years of vacancy, it was acquired by the Leopoldina in 2009 and according to the specifications for monument preservation regulations renovated until 2011. Since the beginning of 2012, it has served as the headquarters of the Academy.

Public guided tours are offered at the following times:

END_OF_DOCUMENT_TOKEN_TO_BE_REPLACED

Guided Tours of the Archive

Public guided tours are offered on the following dates:

Entrance fees are € 6,50, with a discounted fee of € 5,- for retirees and holders of the Halle-Pass.

A limited number of Tickets is available at the visitor desk of the Stiftung Moritzburg – Kunstmuseum des Landes Sachsen-Anhalt (vis-à-vis the Leopoldina).

The Moritzburg is also meeting point for the guided tours.

The guided tours of the Leopoldina archive are free of charge. The number of participants is limited, registration in advance is required.