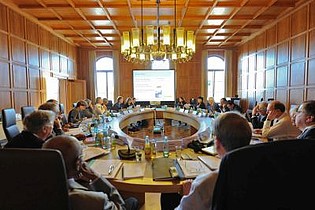 Given the complexity of global issues, governments and supranational associations are in greater need than ever of the unbiased expertise of the worldwide scientific community. The German National Academy of Sciences Leopoldina represents the German scientific and academic community in international academy associations. Its active involvement in these bodies allows it to make a significant contribution to the global scientific debate and advise on international policymaking.

All European Academies (ALLEA) is an association comprising 58 national scientific academies from 40 European countries. ALLEA encourages academies to actively share information and provides European society and its scientific community with advice on higher education, science, research and innovation.  Acting without commercial or ideological interests, ALLEA is committed to creating the right conditions to allow science to flourish in Europe and around the world. The Leopoldina has been a member of ALLEA since 2004. More

EASAC is the association of national science academies of the EU member states. It aims to be the collective voice of the EU national academies in Brussels and to provide the EU institutions with scientifically grounded recommendations on current political issues. It is particularly important to have this kind of independent scientific voice in Brussels as up to 80 percent of new legislation in the EU member states is initiated by EU institutions. More

Federation of the European Academies of Medicine (FEAM)

This association brings together 13 European scientific academies to focus on medical issues that are particularly relevant within the European Union. FEAM regularly produces scientific statements which feed into the EU’s legislative processes. The Leopoldina has been a member of FEAM for several years now. More

Human Rights Committee (HRC) of the Leopoldina and International Human Rights Network of Academies and Scholarly Societies (The H.R. Network)

Science needs freedom to flourish. That counts for research in general and for each individual scientist. The Leopoldina is member of the International Human Rights Network of Academies and Scholarly Societies (The H.R. Network), which aims to help persecuted scientists. It has created its own Human Rights Committee, which focuses on human rights in science as well as bioethical questions. The current HRC chairman is Leopoldina member Prof. Hans-Peter Zenner. More

The InterAcademy Partnership (IAP) was formally launched in South Africa in March 2016, bringing together established networks of academies of science, medicine and engineering, namely IAP - The Global Network of Science Academies, the InterAcademy Medical Panel (IAMP) and the InterAcademy Council (IAC).

Under the new InterAcademy Partnership, more than 130 national and regional member academies work together to support the special role of science and its efforts to seek solutions to address the world's most challenging problems. In particular, the new IAP will harness the expertise of the world's scientific, medical and engineering leaders to advance sound policies, promote excellence in science education, improve public health, and achieve other critical development goals.  The Leopoldina has been member of the former IAP since 2008. Prof. Volker ter Meulen, former President of the Leopoldina, has been elected Co-Chair of the IAP in 2013. More

Federation of the European Academies of Medicine (FEAM)