Scientific Advisory Board of the United Nations Secretary-General (UNSAB) 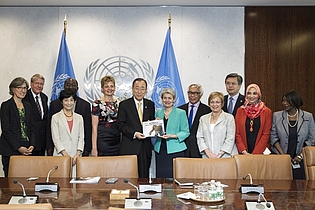 Handing over the final report of the UN Scientific Advisory Board. Image: UN Photo/JC McIlwaine

The UN Secretary-General’s Scientific Advisory Board (UNSAB) included 26 scientists from all over the world mandated to advise the UN Secretary-General and the heads of the UN organizations on global sustainable development. The aim of the interdisciplinary body was to strengthen the science-policy interface and, thus, ensure that up-to-date scientific findings were appropriately reflected in high-level political and strategic debates of the United Nations. Former Leopoldina President Jörg Hacker served as a member of the UNSAB from 2014 to 2016.

The UNSAB provided advice to the UN Secretary-General Ban Ki-moon and to the heads of the UN organizations on matters concerning science, research, and technology, with a special focus on sustainable development. The objective was to ensure that the full range of current scientific knowledge was included in the political-strategic discussion at the United Nations. UNSAB was designed to strengthen the science-policy interface, to recommend priorities in research and policy, to advise on current affairs, and to identify knowledge gaps and research needs.

Composition and mode of operation

The UNSAB was composed of 26 internationally renowned academics, 13 women and 13 men, from both basic and applied research. Their combined collective expertise covered a broad range of scientific fields commonly associated with sustainability. Additionally, all members had extensive experience in science-based policy advice.

UNSAB working meetings were held twice a year. The first meeting took place in Berlin at the invitation of the German Federal Government in January 2014, in the presence of UN Secretary-General Ban Ki-moon. Further meetings followed in Paris (December 2014), Kuala Lumpur (May 2015), Saint Petersburg (December 2015) and Trieste (May 2016). UNSAB members worked in both plenary sessions and thematic working groups in order to elaborate statements and recommendations for the UN Secretary-General and the heads of UN organizations. The UNSAB Secretariat was located at the UNESCO headquarters in Paris.

The role of the Leopoldina

The German Federal Ministry of Education and Research granted the Leopoldina funding to support the work of former Leopoldina President Professor Dr Jörg Hacker in the UNSAB. Subsequently, a secretariat was set up for this purpose at the International Relations Department of the Leopoldina. Its main task was to provide support in drafting and coordinating statements prepared by working groups which Jörg Hacker led or was otherwise involved in. In addition, the secretariat maintained a constant dialogue with other actors at the national and international level. It also supported the implementation of the 2030 Agenda for Sustainable Development in Germany, for instance by organizing events for decision-makers and scientists.

The Turn to Sustainability? The Agenda 2030 and its Implications for Science and Policy (2016)

The Future of Scientific Advice to the United Nations (PDF, 2016)

The Crucial Role of Science for Sustainable Development and the Post‐2015 Development Agenda (PDF, 2014)