Members of the Leopoldina 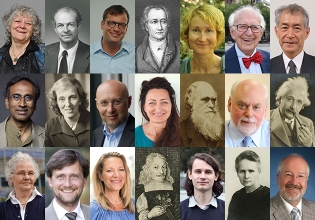 Collage: Jonas Traudes for the Leopoldina

The Leopoldina unites researchers with outstanding expertise in their respective fields, currently counting around 1,600 Academy members from over 30 countries. Election to the Academy is carried out in a multi-stage selection process and admission criteria are outstanding scientific achievements. All members are actively involved in the work of the Leopoldina.

While the Leopoldina was originally limited primarily to researchers from medical and natural sciences, it has increasingly embraced the empirical behavioral, cultural, social and human sciences since the early 1990s. Social perspectives have thus become an integral part of its topics. It is the member strongest among Germany academies with more than a quarter of its members coming from other countries.

The Leopoldina expands its circle every year. Prospective members are first proposed by an Academy member and then the election is carried out by the Presidium in a multi-stage selection process. Since 2009, new members have no longer been admitted to the Academy as corresponding members, but exclusively as full members. They take an active part in the Academy’s work, for example by participating in statements and recommendations, by acting as reviewers, or by giving lectures.