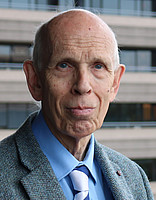 Petersen is distinguished for studies, revealing the mechanisms by which secretion from exocrine glands are controlled. He pioneered single channel current recording in epithelial cells, characterizing several types of calcium-activated ion channels important for fluid secretion. He discovered hormone-evoked local calcium signals and showed that they controlled both fluid and enzyme secretion. More recently, he has discovered how certain alcohol metabolites evoke excessive calcium release from intracellular stores, thereby initiating pancreatitis, a human disease in which the pancreas digests itself and its surroundings. He has defined the intracellular receptor mechanisms responsible for alcohol-related pancreatitis and shown how they can be blocked.

Ole Petersen is Professor of Physiology in the School of Biosciences at Cardiff University. He was elected Fellow of The Royal Society in 2000, Member of the German National Academy of Sciences Leopoldina in 2010. In 2017, he was elected Honorary Member of the German Society for Gastroenterology, Digestive & Metabolic Diseases More recently, he received the American Physiological Society’s Walter B Cannon Memorial Award. Ole Petersen is Vice-President of Academia Europaea and Director of the AE Cardiff Knowledge Hub. He has been appointed Chief Editor of American Physiological Society’s Open Access journal “Function” to be launched 2020.