The competition has emerged from the academy's recommendation "Aging in Germany", which has been handed over to the Federal President in 2009. The German National Academy of Sciences, Leopoldina, had called for the competition and asked to show in "New Images of Aging" the life plans and prospects of aging today and tomorrow. On 12 April 2010 from more than 400 entries, the jury selected nearly 80 photos to be shown in a traveling exhibition.

It is high time society reassessed its perceptions of old age. Research and our individual experiences with our own parents, grandparents and elderly neighbours has shown that old age today is very different to what it was a generation ago. Not only do people live longer and stay healthy longer, they continue to contribute to society and to fulfil essential roles right into their old age. That is why it is important that we present the new and varied face of old age and aging in today’s world as well as considering in what ways older people and their lifestyles will be even more diverse in the future. Our classic conceptions are no longer accurate, and yet we still see them upheld across society, on the big and the small screen and in the many companies that cling on to their age-based prejudices when deciding who to hire, promote or train.

Society’s perceptions of old age have a significant influence on how long people hope to live and on the quality of their lives as senior citizens. Annette Schavan, former German Federal Minister for Education and Research, says, “Compared with the rest of Europe, Germany’s population is aging considerably. It’s time for us to adapt to this with respect to our education and research systems, our provisions for life-long learning and the ways in which we organise labour and healthcare and structure residential areas. This is our big chance to move away from stereotypes, to put an end to age discrimination and to assess people based on their actual skills and capabilities.” 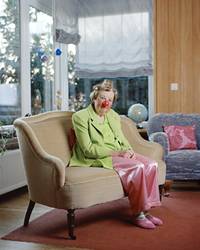 In first place, winning €500, came Gerhard Weber with his image “Ursula and Siegfried M.”, taken in 2009. With this work, Weber, a freelance photographer from Grimma, gained an insight into the private lives of a couple from his community by capturing them in an intimate atmosphere.  With this photograph, he is addressing one of the great taboos of old age – sexuality – in a powerful and artistic way, presenting the couple sympathetically, authentically and with an open mind. The couple explain that intimacy and physicality play an important role in their happy relationship, which they have successfully maintained into old age.

The jury awarded second place and a prize of €300 to Anna Mutter, a freelance photographer from Hamburg, for her photograph “Gerlind Pusch” from 2009, part of her “Sunset” series. The female clown in the picture belongs to a group of nine performers aged between 50 and 77 who have switched from completely different careers to professional comedy. They met at a clown course and began touring together. Without necessarily being aware of this context, the viewer is prompted to think about the way old people are presented in society. The clown’s mask hides the women’s “true age” just as people’s clothes, environment and behaviour can often make their age difficult to guess.

Third place was shared by Daniela Risch with “Untitled”, 2008, from the series “Helga”, and David Lohmüller with “Strike with Nintendo Wii”, 2009. They each received a prize of €200. Risch is an artist based in Essen and Berlin whose pictures explore identity and how it develops through life, in this case by presenting her own mother’s lifestyle and circumstances. David Lohmüller took his photo of the Nintendo player in the Martha-Maria old people’s home in Stuttgart. She is enjoying the latest generation of video games, which are actually popular with many old people and which, by encouraging movement, can have a positive effect on players’ health. 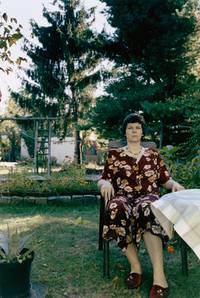 Back to the Standing Committee Demographic Change