Science in a European dialogue 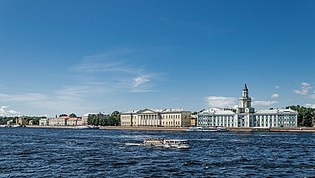 Over 40 outstanding young scientists will come together from 6th to 10th July 2014 in St Petersburg, aiming to reflect on the current developments in the national science systems, the position of young researchers and the possibilities for international cooperation in a comparative European perspective.

Innovative research projects will be also presented and debated in an interdisciplinary frame, also considering the possibilities for research-based bilateral cooperation. The participants represent a wide spectrum of scientific disciplines and were selected on the basis of a competitive procedure after a widely published call for participation.

The German-Russian Young Researchers’ Forum is a bilateral initiative developed during the German-Russian Year of Education, Science and Innovation 2011/12, which was initiated by the federal governments of Germany and Russia. The first forum took place in 2011 in Moscow, the second in 2012 in Berlin and Halle (Saale) and the third in 2013 in Bonn, Cologne and Jülich. This year the forum is hosted in St Petersburg. Russia’s northern metropolis possesses not only a remarkable tradition as a science location, but also a national and international outreach, and a significant diversity of higher education and research institutions.

The forum offers a dialogue platform covering topics from science, research and innovation – with joint relevance for Germany, Russia and Europe. The concept envisages three major approaches: the enabling of a proactive Platform for interaction, exchange and networking, the presentation of current research projects of young researchers in the frame of a science slam, and the exchange with representatives of science organisation on key topics of the development of the science landscape – in the frame of science talks. The programme of this year’s forum stands under the motto “Ever-Committed to the ‘New’? Rethinking the Sciences and Humanities”.