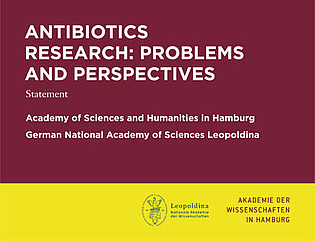 Fewer and fewer antibiotics are available for an increasing number of infections caused by antibiotic-resistant bacteria. As a result, it is becoming increasingly difficult to treat infected patients successfully. The Academy of Sciences and Humanities in Hamburg and the German National Academy of Sciences Leopoldina addressed this issue in their joint statement, “Antibiotics Research: Problems and Perspectives” in January 2013. The paper is now available in English, just in time when the topic is on the agenda of the G8 summit. The academies list eight recommendations that show ways to prevent the further spread of antibiotic resistance and to develop urgently needed antibiotics.

“This development is a cause for grave concern. Our statement focuses on the contribution by research and on the necessary parameters in society,” said Professor Ansgar W. Lohse, spokesperson for the Working Group on Infection Research and Society at the Academy of Sciences and Humanities in Hamburg. “We need genuine incentives for new and more intensive antibiotic research so we can develop medications more quickly,” he added.

“This field is a task for society as a whole,” said Professor Jörg Hacker, President of the German National Academy of Sciences Leopoldina. “Society does not only need greater research efforts and a faster translation of the findings into applications, but also dialogue on how antibiotics can be used responsibly and on how resistance can be prevented. We are setting up a round table on this topic and will invite all the relevant partners to join it.”

The Leopoldina recently called on the heads of state and government of the G8 member states to focus their attention on the topic of drug-resistant infectious agents. In partnership with other academies the Leopoldina provided the statement “Drug Resistance in Infectious Agents – A Global Threat to Humanity” which was handed to the participating governments in order to be incorporated into the negotiations of the G8 summit which starts today in Lough Erne, Northern Ireland.

According to the WHO, the global occurrence of antibiotic resistance poses one of the greatest threats to human health. It is estimated that around 25,000 patients die each year in the EU alone from an infection with bacteria that are resistant to antibiotics.

Academy of Sciences and Humanities in Hamburg