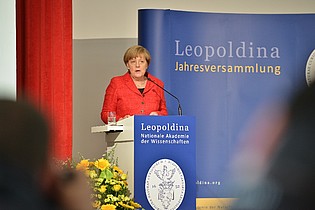 “Symmetry and Asymmetry in Science and Art” – this topic is the focus of the German National Academy of Sciences Leopoldina´s Annual Assembly that opens today in Halle (Saale). Renowned scientists will delve for two days into the phenomenon of symmetry, which has a wide range of application and great significance beyond the boundaries of science. The Federal Chancellor Dr. Angela Merkel delivered a keynote speech at the official opening ceremonies.

A total of 14 specialized lectures will approach the Annual Assembly’s topic from all different perspectives. In his keynote lecture on Friday, the philosopher Prof. Dieter Birnbacher (Universität Düsseldorf) will examine “Breaches of symmetry in morality“. Further lecture topics will include the influence of symmetries in the search for the Higgs Boson (Prof. Peter Jenni, Geneva), in researching the neural control of movement in animals (Prof. Ansgar Büsches, Cologne), in the emergence of cancer as the result of excessive wound healing, and in many more fields.

The Friday evening lecture by the astrophysicist Prof. Günther Hasinger (USA) entitled “Is the Sky Symmetrical?”, in which he probes the symmetries in the cosmos, will be one of the highlights of the Annual Assembly. In the talk, he as much examines the emergence and development of galaxies, stars and planets as he does the development of black holes and their impact on the galaxies.

On Thursday 17 September, the day before the assembly opened, the Leopoldina Senate elected a new Vice President and one new Presidium member. Plant geneticist Prof. Ulla Bonas, Professor at Martin Luther University Halle-Wittenberg, is now one of the Leopoldina’s four Vice Presidents. She takes the place of microbiologist Prof. Bärbel Friedrich, Scientific Director at the Alfried Krupp Wissenschaftskolleg in Greifswald. Computer scientist Prof. Thomas Lengauer, Director at the Max Planck Institute for Informatics, was elected as a new member of the Presidium. He takes over from chemist Prof. Helmut Schwarz, Professor at the Technische Universität Berlin and President of the Alexander von Humboldt Foundation.

Impressions from the opening ceremonies of the Annual Assembly 2015

END_OF_DOCUMENT_TOKEN_TO_BE_REPLACED

Programme of the Annual Assembly 2015