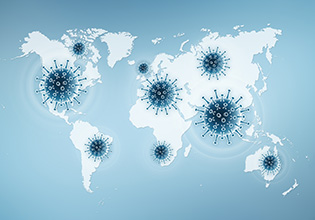 In the run-up to the summit of the G20 states on October 30 and 31, 2021, in Rome/Italy, the science academies of these countries (Science20 Dialogue), including the German National Academy of Sciences Leopoldina, have published the joint statement “Pandemic preparedness and the role of science”. It contains recommendations – based on the experience of the response to COVID-19 – for improved pandemic preparedness in the future.

The statement was prepared in virtual meetings under the leadership of the Italian Accademia Nazionale dei Lincei and with the participation of members of the Leopoldina. “Pandemic preparedness, like climate change, is a global challenge that cannot be tackled by individual countries alone. With the joint statement, the science academies of the G20 states are providing important impulses for the summit. This is already the fifth time that the academies have made a contribution in the run-up to the G20 summit and represented the voice of science internationally”, says Prof. (ETHZ) Dr. Gerald Haug, President of the German National Academy of Sciences Leopoldina.

In their joint statement, the academies of the 20 most important industrialized and emerging countries recommend the creation of a global network of surveillance for disease outbreaks based on jointly agreed criteria. This should enable early detection of clustered incidences of morbidity and mortality and allow for rapid response to potential pandemic outbreaks. The academies recommend robust policies and platforms for the collection and global sharing of detailed data, for example on pathogen genomics. In addition, they advocate epidemiological surveillance of directly transmitted respiratory diseases and bacterial infections in the context of the observed increase in antibiotic resistance.

The academies call for distributed manufacture and delivery of diagnostics, medicines, vaccines, medical supplies and equipment. Technology and manufacturing capability for products of medical need should be increased worldwide, but especially in low and middle-income countries. Regulatory processes should also be streamlined, and access to new technologies accelerated, while taking into account intellectual property, patenting and pricing mechanisms.

In addition, the academies support efforts to establish an International Agreement on Pandemic Preparedness at the World Health Organization (WHO) level, as recently proposed by more than 20 heads of state and government and health ministers of the G7. To this end, they recommend using intergovernmental negotiations to share experiences in global collaboration during the coronavirus pandemic and discussing incentives and mechanisms to strengthen the International Health Regulations.

In autumn, the statement will be officially handed over to the Italian G20 presidency during the meeting of the S20 academies, which will take place in Rome/Italy on September 22 and 23. The Group of Twenty (G20) summit of heads of state and government scheduled to take place in Rome/Italy in October brings the leaders of the twenty most important industrialized and emerging countries together. It will be the fifth time that science contributes with their “Science20” dialogue forum, created specifically for this purpose. Scientific consultation of the G20 summits had its premiere in 2017 as part of the German G20 presidency. Under the leadership of the Leopoldina, the national science academies of the G20 countries had drawn up recommendations for improved global healthcare at that time. For more than ten years, the G7 summits have also been accompanied by the academies of science.

G20 Statement “Pandemic preparedness and the role of science” (2021)