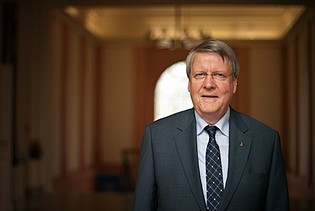 Image: Karsten Möbius for the Leopoldina.

The microbiologist Professor Jörg Hacker has been appointed to the new United Nations Secretary-General’s Scientific Advisory Board. The Scientific Advisory Board was set up by the UN General Secretary Ban Ki-moon. The 26 members are to serve as a source for advice on science, research and technology. The issues of the sustainability of our society´s development and the eradication of poverty play a central role in the consultations. The appointees include scientists from a broad range of scientific fields. UNESCO will host the Secretariat for the board.

The main function of the United Nations Secretary-General’s Scientific Advisory Board is to bring its expertise to bear on issues of research and development that fall within the purview of the organization. Social and ethical aspects will also be given due regard in the deliberations. In performing this function, the Board will strengthen the connection between science and policy, set priorities for scientific research on sustainable development, provide advice on current issues, as well as identify knowledge gaps and specific assessment needs. UNESCO was delegated the task of setting up the council, including its leadership and management. The members of the board will serve in their capacity as an individual pro bono for two years. According to UNESCO, the first session of the Board will be held at the beginning of 2014.

“Being afforded the opportunity to be part of such an important committee represents a singular challenge. I am looking forward to making my contribution to the UN Secretary-General’s Scientific Advisory Board,” said Prof. Jörg Hacker. “Questions concerning sustainable development of our society also play a decisive role in the work at the German National Academy of Sciences Leopoldina. Preserving the means of existence for future generations is one of the most pressing concerns in today’s world,” commented Hacker further.

The microbiologist Professor Jörg Hacker has been president of the German National Academy of Sciences Leopoldina since 2010. Prior to that, he was vice-president of the German Research Foundation from 2003 to 2009 and president of the Robert Koch Institute in Berlin from 2008 to 2010. He has also done work outside of Germany on a number of occasions. In the years 2000 and 2005 he spent time at the Institut Pasteur in Paris engaged in research projects and in 2006 he accepted a position as guest professor at Tel Aviv University (Israel). His areas of expertise include the molecular analysis of different infectious agents.

Jörg Hacker studied biology at Martin Luther University in Halle (Saale) from 1970 to 1974, specialising in genetics and microbiology. After earning his Ph.D. in Halle in 1979 and gaining his postdoctoral lecture qualification at the Institute for Microbiology at the University of Würzburg in 1986, Hacker became a professor of microbiology in Würzburg in 1988 and director of Würzburg’s Institute for Molecular Infection Biology in 1993.

A list of members of the UN Secretary-General’s Advisory Board can be found via the link to the UNESCO press release on the right.