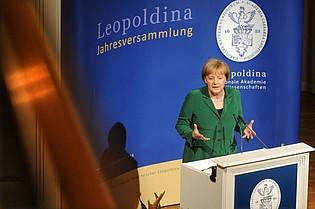 “What is life?” – the Leopoldina’s Biennial Assembly, which took place September 23-25 in the Kongress- und Kulturzentrum in Halle, put this question at the heart of its academic discussions. The topics covered a wide range of issues and discussed the various perspectives adopted by the natural sciences, life sciences and humanities.

In her speech, Chancellor Merkel underlined the importance of the Leopoldina. Jörg Hacker, President of the Leopoldina, and Reiner Haseloff, Prime Minister of Saxony-Anhalt, also spoke about the Academy’s role in the research sector in Germany and around the world. Chancellor Merkel said: “There is now one voice that speaks for the German scientific community as a whole.” She went on to say that the Leopoldina represents the entire range of the sciences and humanities and promotes cooperation between different scientific and academic institutions. “As a result,” she said, “the public is listening more to what science has to say,” and its voice is being heard internationally. Germany had closed a gap by designating the Leopoldina as its National Academy of Sciences.

Eighteen presentations given by top-level researchers from a variety of disciplines addressed the question of “what is life?” from very different perspectives. The academic presentations covered a broad spectrum of topics and bridged the natural sciences, the life sciences and the humanities.

The keynote speech was entitled “Life from the point of view of molecular biology” and was given by Vice-President Prof. Bärbel Friedrich ML (Berlin) on the first day of the assembly. It focused on the most fundamental unit of life, cells, and their defining characteristics, such as their metabolic and reproductive processes and the way they exchange genetic information. Prof. Friedrich, a molecular biologist, showed that DNA sequencing techniques, proteomic analysis and metabolomic analysis now allow scientists to explore life-forms that were previously almost inaccessible. The technologies also provide information on family relationships between organisms, the origins of organisms, and the way they interact with other life-forms. The findings from this study of complex life processes have opened up a new research field known as “synthetic biology”.

The Evolution of Beauty

In the evening Christine Nüsslein-Volhard ML, winner of the Nobel Prize in Physiology or Medicine, spoke about “The evolution of beauty”. Using the zebrafish as an example, she explained how colourings and patterns develop from stem cells. “To understand evolution, it is important to know how colour patterns come about during development,” said Nüsslein-Volhard. “Which genes are involved, how do they function, what do they produce?” In fish, colour patterns are formed by three different types of pigment cells. On the very first day of embryonic development, neural crest cells, which will later develop into pigment cells, migrate to the body and lead to the production of stem cells that will eventually provide the pattern for the fully grown fish. Migration processes and interactions between the individual cell types play a big role here. The aim of the research is to identify the genes and corresponding functions that lead to pattern variations in the course of evolution.