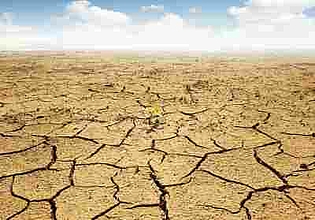 The only way to achieve the goal of limiting global warming caused by human activity to less than two degrees Celsius is to adhere to national and international agreements such as the Paris Agreement without delay. On 23 July, the Leopoldina outlined immediate measures for protecting the climate in its statement “Climate goals 2030: Towards a sustainable reducton of CO2 emissions”.

According to the authors of the paper, we are currently experiencing a “tragedy of long-term goals: Every day the chasm widens between the looming existential threat posed by climate change and the repeated delays in taking political action.” In light of this, the working group led by marine researcher Prof. Dr. Antje Boetius (Bremen) and climate researcher Prof. Dr. Gerald Haug (Mainz) endorses the call included in current expert reports to impose a standard price for greenhouse gas emissions across all sectors.

They argue that the initial CO2 price must be set well above the current price in European emission trading and should gradually increase over the coming years. In addition, policy makers would need to regularly review CO2 prices and make adjustments as necessary. The authors contend that CO₂ pricing must become a clear and inviolable part of climate policy.

However, the statement also points out that CO₂ pricing alone is insufficient to achieve the 2030 climate goals. The proceeds from CO₂ pricing should be transparently reinvested in low-carbon infrastructure, a relative reduction in energy prices and social justice in the form of “climate dividends”, amongst other measures. The goal is to create incentives for climate-friendly behaviour and economic activity.

According to the authors of the statement, effective CO₂ pricing would in crease the likelihood of phasing out fossil fuels more quickly. Germany already has the technology to take this step, especially in conjunction with European partners. Prerequisites include investments in renewable energies, a modern power grid and storage technologies.

The statement recommends extensive electrification in the transportation sector, which is responsible for around 20 percent of all CO₂ emissions. Local public transport, long-distance rail service and rail freight service must all be significantly expanded and improved. With regards to private passenger vehicles, the transition to hybrid and battery electric vehicles is considered to be an effective short-term strategy. In cities, local public transport, bicycle traffic and pedestrians should take priority.

The statement was very well received by policy makers and the press. On 31 July, the German newspaper DIE ZEIT wrote on its title page: “The statement on German climate policies that the Leopoldina, the National Academy of Sciences, presented on Tuesday should certainly not just be filed away. Its tone is especially noteworthy: at once clear, critical and encouraging.”