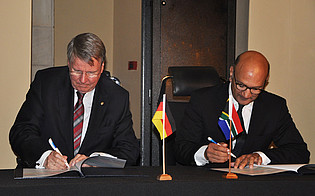 The Leopoldina has had a good working relationship with the Academy of Science of South Africa for many years, and the 2012/2013 German-South African Year of Science recently strengthened the bond. The aim of this initiative by the German Federal Ministry of Education and Research and the South African Department of Science and Technology is to improve scientific collaboration between the two countries. For example, the academies organised two joint symposia entitled “Technological Innovations for a Low-carbon Society” and “Socio-ecological Novelty – Frontiers in Sustainability Research”.

“We can only tackle global challenges if we take collective responsibility for them and work together to find solutions. That is why international cooperation is so important to our work,” said Leopoldina President Hacker. He cited the global spread of new pathogens and the impact of climate change as just two examples. “Africa is a rapidly changing continent and science can have a positive influence in shaping its future. South Africa will play a key role in this,” Hacker said.

The agreement foresees the two academies cooperating on statements and recommendations on various scientific topics, organising joint seminars and conferences, and supporting young scientists and researchers.

Since the Leopoldina was appointed the German National Academy of Sciences in 2008 it has served as the voice of German science in the dialogue between academies around the world. The discussion of current scientific issues in top-flight international symposia is an important aspect of the Leopoldina’s international activities. The Leopoldina also provides science-based policy advice on an international level.

The Academy of Science of South Africa was launched in 1996 under the patronage of Nelson Mandela, who was president of South Africa at the time. It was officially appointed South Africa’s national academy of science in 2001. It represents the country within the international community of scientific academies and provides independent science-based policy advice.

For an overview of the Leopoldina’s international activities, please click the link on the right.

Academy of Science of South Africa