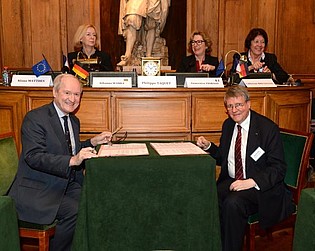 The German National Academy of Sciences Leopoldina and the French Académie des sciences are set to collaborate even more closely in future. Today in Paris, Leopoldina President, Prof. Jörg Hacker, and the President of the French national academy, Prof. Phillipe Taquet, signed a cooperation agreement consolidating the already close ties between the two institutions.

“We have had a close and friendly relationship with the Académie des sciences for many years now. The year of the 50th anniversary of the signing of the Franco-German Elysée Treaty provides a welcome opportunity to officially consolidate and further develop our scientific collaboration,” said Prof. Hacker. The French national academy is also a valued partner in the field of policy advice. “Like the Leopoldina, the Académie des sciences unites the efforts of many outstanding researchers. Cooperation between our national academies is instrumental in ensuring their findings resonate at the international level and are heard, for example, by decision makers at the EU and G8 summits,” he continued.

The agreement foresees the two academies cooperating on statements and recommendations on various scientific topics. The Leopoldina and the Académie des sciences also plan to host further joint conferences, seminars and colloquiums. They will thus jointly organise a symposium on modern vaccination strategies in Berlin on 10 June in cooperation with the Max Planck Institute for Infection Biology Berlin. The programme will include appearances by Nobel laureate and Leopoldina member Prof. Harald zur Hausen and Prof. Jules Hoffmann, Nobel laureate and member of the Leopoldina and the Académie des sciences.

The academy presidents signed the Memorandum of Understanding as part of the opening ceremony for the Franco-German science week in the presence of Geneviève Fioraso, French Minister for Higher Education and Research, and Prof. Johanna Wanka, German Minister of Education and Research. The science week is part of the series of events on occasion of the 50-year jubilee of the Franco-German Elysée Treaty.

50-year jubilee of the Elysée Treaty