Meeting of the G8 Science Ministers and National Science Academies 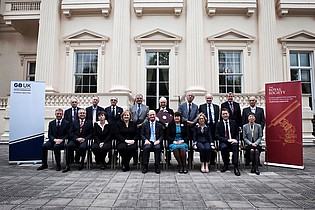 The participants of the London meeting. Image: Royal Society.

On Wednesday 12 June 2013, a meeting between the presidents of the G8 national academies and the science ministers took place at the Royal Society for the purpose of discussing those global challenges that demand a scientific response. One topic of particular interest was the problem of antibiotic resistant pathogens. On 29 May 2013 the academies of sciences had already released a statement addressing that subject.

Professor Jörg Hacker, president of the German National Academy of Sciences Leopoldina observed: “An open and constructive discussion between the science ministers and the representatives of the G8 national academies has shown that science, and thus the corresponding academies, play an important role in the resolution of global problems. It has once again become clear that an increasing resistance of pathogens to antibiotics represents an especially pressing problem. Finding a solution will require a coordinated effort on the part of research, politics and society. It pleases me to see that the Leopoldina has already formulated recommendations at the national level addressing precisely this issue. It has now become a matter of implementation – both nationally and globally.“

The meeting was part of the preparation process for the G8 Summit that will take place in Lough Erne on 17 – 18 June. Among other topics discussed was global research infrastructure including „Open Data“ as well as „Open Access“ to published research outputs.

Since 2005 each year the national academies in those countries – Canada, France, Germany, Italy, Japan, Russia, the UK and the United States – have worked together to produce joint, scientifically grounded statements on themes of relevance to the global community. These statements are intended to assist the governments during negotiations at the annual G8 summits. This year’s statements were prepared during a conference of academy representatives in New Delhi from 7 to 9 March. The academies of the newly industrialised countries Brazil, China, India, Mexico and South Africa are also involved alongside the academies of the G8 members. The German National Academy of Sciences Leopoldina represents German scientists within this group.