Thomas Krieg is Vice President of the Leopoldina 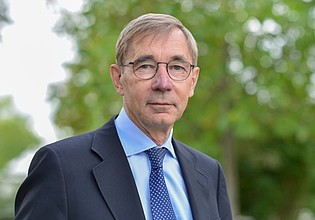 In its session on 19 September, the Senate elected physician Prof. Dr. Thomas Krieg (Cologne) as the newest Vice resident of the Leopoldina. The dermatologist succeeds Prof. Dr. Martin Lohse, who has completed his two terms in office. In addition, Prof. Dr. Hans-Peter Zenner (Tübingen) was elected Secretary of Class III – Medicine – and Prof. Dr. Martin Quack (Zurich/Switzerland) was re-elected to a second term as Presidium Member for the adjunct territory of Switzerland.

Thomas Krieg was elected to the Leopoldina in 1997 and was a member of the Senate from 2011 to 2015. Since 2016, he has served as spokesperson for Class III – Medicine. He is the Chair of the Member Selection Committee, which was established in 2015 and recommends scientists engaged in highly interdisciplinary research for election to the Leopoldina.

Thomas Krieg studied medicine in Berlin, receiving his doctorate in 1973. In 1982, he completed his postdoctoral qualification (Habilitation) at the Ludwig Maximilian University of Munich (LMU Munich). Following an appointment as a visiting scientist at the National Cancer Institute, Bethesda/USA, he was engaged in research at LMU Munich before being appointed to a professorship in the university’s Department of Dermatology and Allergology. In 1991, he was named Professor and Chair of the Department of Dermatology and Venereology at the University of Cologne. From 1995 to 2003, Krieg led the Center for Molecular Medicine Cologne (CMMC). From 2011 to 2019, he held the office of Dean of the Medical Faculty in Cologne.