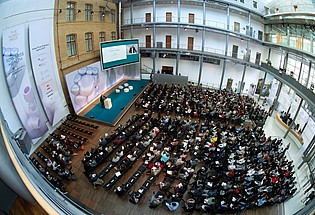 Photo: David Ausserhofer for the Leopoldina

How can we ensure a healthy life and responsible healthcare for all? How will climate change affect our health? Could changes to working conditions reduce inequalities in life expectancy? These are just some of the questions that will be at the heart of the Nobel Prize Dialogue “Towards Health: Equality, Responsibility and Research” on 8 November in Berlin.

Five Nobel Prize Laureates will come together to discuss the future of health research and policy with researchers and political decision-makers. The National Academy of Sciences Leopoldina has joined forces with Sweden’s Nobel Media AB to organise the first Nobel Prize Dialogue held in Germany. Guests include the economist Prof. Alvin E. Roth, PhD, of Stanford University, Stanford/USA, who received the Nobel Prize in Economics in 2012. Roth developed a model for a kidney exchange for live donor transplants and will discuss the possibility of implementing this model in Germany. His algorithm is already being used to handle admissions to schools and universities in the USA and Canada.

Prof. Dr. Peter Agre, who received the Nobel Prize in Chemistry in 2003, is engaged in the fight against malaria in various African countries. He will discuss how healthcare can be organised locally and will also address health in the context of climate change. As the Earth continues to warm, the malaria-carrying species of mosquito could reintroduce this disease in Europe. The negative consequences of climate change have also been addressed in detail by the Intergovernmental Panel on Climate Change (IPCC), winner of the 2007 Nobel Peace Prize.

Prof. Dr. Heyo Kroemer, Chief Executive Officer of the Executive Board of the Charité – Universitätsmedizin Berlin, will take up the topics of health policy, the provision of healthcare and the promotion of research.

Impressions from the event