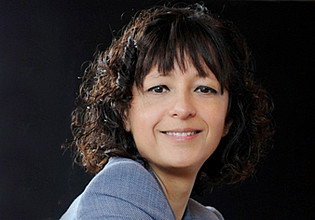 The President of the German National Academy of Sciences Leopoldina Gerald Haug extends his congratulations to Emmanuelle Charpentier on this prestigious award: “With this year's Nobel Prize, groundbreaking discoveries in the field of genome research are being recognized, which hold great promise for future applications in medicine, biotechnology, animal and plant breeding. I am delighted that Emmanuelle Charpentier, an outstanding colleague of the Max Planck Society, is being honoured.”

Emmanuelle Charpentier studied biochemistry and microbiology at the University Pierre and Marie Curie in Paris (France), where she also received her PhD. After research stays in the USA, the scientist habilitated at the University of Vienna (Austria) and then went on to Umeå University (Sweden), where she still holds a visiting professorship. From 2013 to 2015 Charpentier was professor at the Hannover Medical School (Germany) and headed the Department of Regulation in Infection Biology at the Helmholtz Centre for Infection Research in Braunschweig (Germany). In 2014 she was awarded an Alexander von Humboldt Professorship. From 2015 to 2018 she was director at the Max Planck Institute for Infection Biology in Berlin (Germany). Since 2018 Charpentier has been acting and founding director of the Max Planck Unit for the Science of Pathogens in Berlin.

Emmanuelle Charpentier has been honored with numerous prizes for her scientific achievements, including the Leibniz Prize 2016, the Paul Ehrlich and Ludwig Darmstaedter Prizes 2016, the Annual Award for Outstanding Contributions to Biomolecular Technologies 2016 of the US Association of Biomolecular Resource Facilities, the Kavli Prize in the field of nanosciences 2018, as well as the Carus Medal of the Leopoldina 2015 and the associated Carus Prize of the City of Schweinfurt 2016. In addition, she was awarded the Richard Ernst Gold Medal of ETH Zurich in 2019 and the Order of Merit of the Federal Republic of Germany. Emmanuelle Charpentier has been a member of the human genetics and molecular medicine section of the Leopoldina since 2015.

The Nobel Prize in Chemistry is currently endowed with a total of ten million Swedish kronor (equivalent to around 950,000 euros). All Nobel Prizes are traditionally bestowed on the laureates on 10 December, the anniversary of founder Alfred Nobel’s death.

The Leopoldina has more than 1,600 members, with a current 34 Nobel laureates among them.