G7 - Leopoldina calls for action on antibiotic resistance, tropical diseases, and the future of the ocean 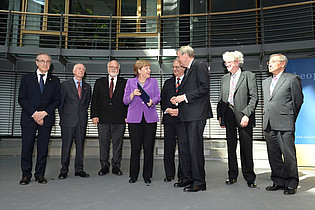 On 29 April, the national science academies of the G7 countries handed three statements to their respective heads of government for discussion during the G7 summit at Schloss Elmau in early June 2015. The papers on antibiotic resistance, neglected and poverty-related diseases, and the future of the ocean were drawn up by the seven national academies under the aegis of the German National Academy of Sciences Leopoldina.

The G7 academies call for a comprehensive strategy to tackle health threats from infectious diseases; progress toward preventing, controlling and eliminating Neglected Tropical Diseases; and steps to place the use and protection of the oceans on a sustainable footing. “It is the task of the national academies of sciences to contribute their scientific expertise to political debates,” said Professor Jörg Hacker, President of the Leopoldina.

The motivation behind the first topic is the rising number of infections worldwide caused by antibiotic-resistant bacteria, coupled to a decrease in the number of effective antibiotics. Within this topic, the academies are addressing issues including drug research, the development of antibiotics, and the use of antimicrobial substances.

The second topic focuses on neglected diseases that frequently afflict people in poorer regions of the world. Such illnesses include African sleeping sickness, river blindness and Dengue fever. The Ebola epidemic in West Africa is one example of how severe the consequences of a disease outbreak can be if there is a lack of tried-and-tested vaccinations and medication. The academies are therefore focusing on how to improve and finance research into such diseases and how to better prepare for major outbreaks.

With regards to the future of the world’s oceans, the academies are looking at pollution caused by the irresponsible disposal of heavy metals and plastic. Another urgent issue is the acidification and warming of the oceans and over-fertilisation from nitrogen used in agriculture.

The academies of sciences of the G7 have been supporting the summit meeting of their heads of state and government for ten years. In the run-up to the summit, they consider pressing issues that are related to the agenda of the meeting but that go beyond it in scope and that need to be addressed multilaterally. On each occasion, it is the host nation’s academy that assumes the role of coordinator – meaning that this year it is the Leopoldina, which also coordinated preparations for the scientific advisory process in the run-up to the G8 summit in Heiligendamm in 2007. Back then, the academies submitted reports on sustainability, energy efficiency, climate change mitigation, and protection of intellectual property.

Impressions from the G7 Dialogue Forum

END_OF_DOCUMENT_TOKEN_TO_BE_REPLACED

G7 Statement: Future of the Ocean