70 Years of the Basic Law: Ten Principles for Freedom of Science 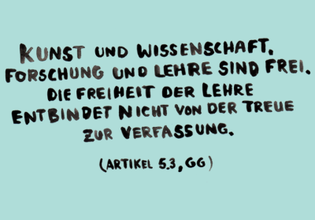 To mark the 70th anniversary of the German constitution ‒ known as the Basic Law ‒ the Alliance of Science Organisations in Germany has drafted a Memorandum which spells out a voluntary commitment in the form of Ten Principles for Freedom of Science. The objective of this memorandum is to draw attention to scientific freedom and strengthen it for coming challenges.

Whether it be aiding scientists and academics from abroad who are threatened (“scholars at risk”), dealing responsibly with simplistic or one-sided information, meeting compliance obligations, or promoting a culture of constructive debate: In this memorandum, the science community lays out its responsibility to promote and support scientific freedom to the best of its ability within its own structures and to increase awareness of the importance of scientific freedom in a democratic society.

The memorandum is published at the conclusion of the joint campaign “Freedom is Our System. Together for Science. 70 Years of the Basic Law” being conducted by the Alliance of Science Organisations in Germany. Since spring, numerous events have been conducted in this connection and compiled on the website www.wissenschaftsfreiheit.de using digital formats such as podcasts, video interviews and many other articles and reports.