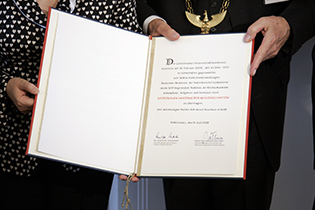 Certificate of appointment 2008. Photo: Jens Schlüter for the Leopoldina

On 14 July 2008 the Leopoldina was designated as the German National Academy of Sciences by the Joint Science Conference of the German federal and state governments. Since then it has worked together with the Union of German Academies of Sciences and Humanities and acatech – National Academy of Science and Engineering in addressing the key challenges facing society. As a national academy it represents German science at the international level.

The Leopoldina will celebrate its anniversary as the national academy at this year´s annual assembly on 21 and 22 September in Halle (Saale) under the heading “Nature – Science – Society”. Academy members and guests will thereby look back at topics that were taken up early on by the Leopoldina and that will continue to shape its work into the future. These include the societal effects of digitization, the threat to biodiversity in the agricultural landscape and the medical-ethical issues surrounding genome research.

The Leopoldina, which was founded in 1652, has its headquarters in Halle (Saale) and also maintains an office in Berlin´s government district. It is funded by the Federal Ministry of Education and Research (80 percent) as well as by the federal state of Saxony-Anhalt (20 percent).

All statements and topics