Traces under Water: Endangered cultural heritage on the seafloor 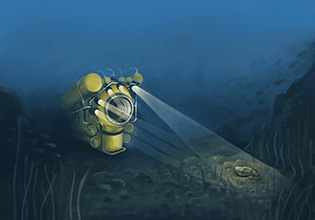 The authors of the publication illustrate the profound importance of the cultural heritage in the North Sea and Baltic Sea for archaeological research in Germany and the other states bordering the two seas. According to the authors, in Germany, the underwater cultural heritage has been explored much less than that on land.

At the same time, there is a lot of pressure to economically exploit the seas and the seafloors – a trend that is only expected to increase. Thus, two primary objectives are laid out in the discussion paper. Firstly, the investigations of the cultural heritage in the North Sea and Baltic Sea should be comprehensive and be carried out to the same high scientific standard as those on land. Secondly, Germany should establish protective measures in its exclusive economic zone which are just as effective as those which have long been in effect on land. The authors’ recommended measures for protecting the underwater cultural heritage and bolstering underwater archaeology include:

Science: Research and education in the relatively young field of underwater archaeology should be expanded, and the research conducted in states bordering the North and Baltic Seas should be coordinated. The authors recommend establishing a close collaboration between marine, geological and archaeological research.

Politics and economy: Cooperation between scientific institutions and the authorities should be strengthened, and closer cooperation between science and business pursued. There should be more publicity promoting knowledge about the cultural heritage found at the bottom of the North Sea and Baltic Sea. State museums, maritime and naval museums, as well as city museums and geoparks should play an important role at disseminating this information.

Law: Germany should ratify the 2001 UNESCO Convention on the Protection of the Underwater Cultural Heritage and establish a specialist authority equipped with the appropriate competences. The implementation of the Valletta Convention in the exclusive economic zone and on the continental shelf should become more consistent.

Administration: Archaeological experts should be included in all spatial and technical planning. Additionally, the German Act on the Assessment of Environmental Impacts should be changed to take into account evidence of early humanity and the environment present at that time (for instance plant remains). Archaeological standards should be developed and integrated in all procedures authorising the intrusion in marine habitats or their use for economic purposes.