The opportunities and limits of genome editing (2015) 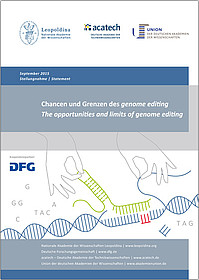 Modern molecular techniques often referred to as “genome editing” or “genome surgery” are currently revolutionising molecular biology research. Technologies such as CRISPR-Cas9 allow for surprisingly simple, controlled gene modifications that are more efficient than the previously available methods. This opens up new scope for molecular biological basic research, particularly into organisms that were not previously accessible for molecular genetic purposes, and for elucidating poorly understood gene functions. This methological innovation also allows for far-reaching applications, from new options for plant breeding and biotechnology to somatic gene therapy for human genetic diseases. Focused basic research is still required, and Germany should be contributing on all levels to these important developments, as well as helping to ensure a safe and responsible application of genome editing that respects the needs of humanity and the environment.

In April 2015, Chinese researchers studied the potential CRISPR-Cas9 has to change the human genome in non-viable human embryos. The results of the study show that the methods behind such an application are far from adequately developed. Such experiments also raise far-reaching social, ethical and legal questions regarding the treatment of hereditary diseases and the integrity of the human germline; they also come close to overstepping the boundaries of scientific freedom. In Germany, germline therapy and the use of modified germ cells for fertilisation is prohibited under Section 5 of the German Embryo Protection Act.

The National Academy of Sciences Leopoldina, acatech – the National Academy of Science and Engineering, the Union of German Academies of Sciences and Humanities, and the German Research Foundation (Deutsche Forschungsgemeinschaft – DFG) stress the great scientific potential of genome editing. They point out that it is ethically and legally acceptable in many areas. The new techniques should not be automatically equated with sporadic cases of improper use or with applications whose ethical and legal ramifications have not yet been assessed. The DFG and the academies endorse the call for an international moratorium on all forms of human germline engineering that could have an impact on the genome of the offspring. The moratorium should give scientists, politicians and society the opportunity to discuss unresolved questions in a transparent and critical way, to evaluate the benefits and potential risks of the techniques, and to develop recommendations for future regulations. However, the moratorium should not constitute a general restriction on methodological developments and thus limit any promising new genome editing approaches for use in research and application.

The opportunities and limits of genome editing (pdf)