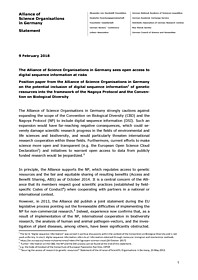 The Alliance of Science Organisations in Germany strongly cautions against expanding the scope of the Convention on Biological Diversity (CBD) and the Nagoya Protocol (NP) to include digital sequence information (DSI). Such an expansion would have far-reaching negative consequences, which could se-verely damage scientific research progress in the fields of environmental and life sciences and biodiversity, and would particularly threaten international research cooperation within these fields. Furthermore, current efforts to make science more open and transparent (e.g. the European Open Science Cloud Declaration) and initiatives to warrant open access to data from publicly funded research would be jeopardized.

Alliance of Science Organisations in Germany