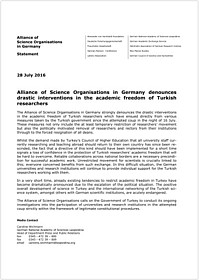 The Alliance of Science Organisations in Germany strongly denounces the drastic interventions in the academic freedom of Turkish researchers which have ensued directly from various measures taken by the Turkish government since the attempted coup in the night of 16 July. These measures not only include the at least temporary restriction of researchers’ movement but also the politically motivated removal of researchers and rectors from their institutions through to the forced resignation of all deans.