Carbon capture and storage in Europe (2013) 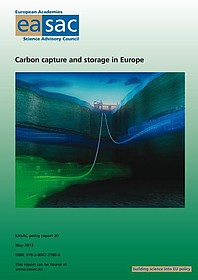 Carbon capture and storage (CCS) is an important component of many national, European and worldwide strategies to tackle climate change. CCS can reduce greenhouse gas emissions by capturing the carbon dioxide (CO2) generated by large point sources before it is released to the atmosphere, and then transporting it to a secure underground storage facility.

The European Academies Science Advisory Council (EASAC) established a Working Group in October 2011 to examine the challenges that must be addressed to secure CCS as a viable component of strategies to mitigate climate change, and consequently to consider what contribution it may make in Europe up to 2050. This report presents the findings and recommendations of that EASAC study.

The three main technologies for CO2 capture – postcombustion capture, pre-combustion capture and oxy-fuel combustion – are considered technologically feasible, but integrated operation on commercial-scale power stations remains to be demonstrated. They have broadly similar costs, adding around 50% to the levelised cost of electricity when applied to coal- or gas-fired power stations. Present and anticipated developments should bring this penalty down to 30–45% over the next 20 years, and further incremental improvements may be expected beyond that timescale. More substantial improvements based on radically new technologies and configurations are currently speculative.