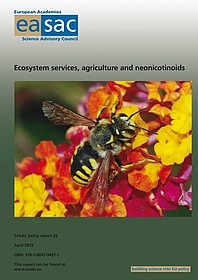 There has been considerable controversy in recent years over the effects of neonicotinoids on honey bees, culminating in a European Commission regulation in 2013 restricting certain uses of these pesticides on flowering crops. This year (2015), the Commission will review the latest science and review the regulations accordingly.

Since restrictions were introduced, scientific research results have continued to be published at a steady pace but disputes between stakeholders continue over their interpretation; some claim that even the limited 2013 restrictions were unjustified by the science, while others see serious ecosystem-wide losses of insects and the species that depend on them. With such a critical European policy issue depending on the science, EASAC decided to conduct a detailed review of the issue. However, while the public debate has focused on honey bees and their pollination services, EASAC concluded that the wider issue should be addressed of the potential effects on organisms providing a range of ecosystem services which are critical to sustainable agriculture. EASAC Member Academies nominated 13 leading experts in related fields to form an Expert Group which worked on this study from April 2014.

This report thus overviews the relation between agriculture and ecosystem services, and what we know of their economic value. Here, even though agriculture is highly managed and simplified, it still depends on services provided by nature. The natural ecosystem provides the original genetic biodiversity used in breeding. Soils are ecologically highly diverse and provide or maintain the soil biota, which contributes to soil formation and structure, fertility, nutrient cycling, carbon capture and storage, as well as water supply. Certain crops depend on pollinators, and pests can be controlled or reduced by natural antagonists that move in to the crop from surrounding natural vegetation. Maintaining strong functional ecosystem services is a critical part of a sustainable agricultural system.