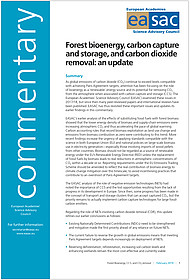 As global emissions of carbon dioxide (CO2) continue to exceed levels compatible with achieving Paris Agreement targets, attention has been focusing on the role of bioenergy as a ‘renewable’ energy source and its potential for removing CO2 from the atmosphere when associated with carbon capture and storage (CCS). The European Academies’ Science Advisory Council (EASAC) examined these issues in 2017/18, but since then many peer-reviewed papers and international reviews have been published. EASAC has thus revisited these important issues and updates its earlier findings in this commentary.

EASAC’s earlier analysis of the effects of substituting fossil fuels with forest biomass showed that the lower energy density of biomass and supply-chain emissions were increasing atmospheric CO2 and thus accelerating the pace of global warming. Carbon accounting rules that record biomass exploitation as land use change and emissions from biomass combustion as zero were contributing to this trend. More recent findings increase the urgency of applying standards compatible with the science in both European Union (EU) and national policies on large-scale biomass use in electricity generation—especially those involving imports of wood pellets from other countries. Biomass should not be regarded as a source of renewable energy under the EU’s Renewable Energy Directive (RED) unless the replacement of fossil fuels by biomass leads to real reductions in atmospheric concentrations of CO2 within a decade or so. Reporting requirements under the EU Emissions Trading Scheme should be amended to reflect the real contribution of biomass energy to climate change mitigation over this timescale, to avoid incentivising practices that contribute to an overshoot of Paris Agreement targets.

The EASAC analysis of the role of negative emission technologies (NETs) had noted the importance of CCS and the lost opportunities resulting from the lack of progress in its development in Europe. Since then, some progress has been made in the concept of transport and storage clusters that can accept captured CO2, but the priority remains to actually implement carbon capture technologies for large fossilcarbon emitters.