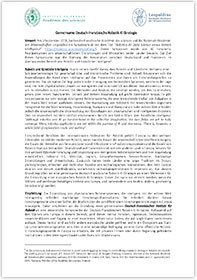 The Académie des sciences in France and the German National Academy of Sciences Leopoldina jointly organised the symposium “Robotics AI” in Paris on 5 September 2018. Based on the meeting, a position paper was drafted. The experts highlight that robotics plays a central role in the field of artificial intelligence. A.I. research and robotics are often not understood as directly connected fields of research. However, precisely the interlinkage between both fields may result in particular innovational strength and new added value potentials.

The position paper was drawn up in the light of the new German strategy on A.I., which is currently being drafted, and the close cooperation of both countries in this research field. The German Federal Government Strategy on Artificial Intelligence will be launched at the Digital Summit in Nuremberg at the beginning of December 2018.