Groundwater in the Southern Member States of the European Union (2010) 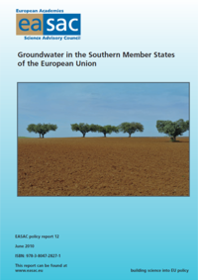 What is the importance of groundwater for Europe?

When rain or snow falls on land, some of the water runs into rivers or lakes and some is released back into the atmosphere through evaporation and transpiration (or alternatively combine as ‘evapotranspiration‘). Much of it, however, collects in the ground where it is taken up by cracks and pores in rocks and soils. The distinct underground areas where groundwater collects are known as aquifers; in the terminology of the Water Framework Directive (WFD), these are also known as groundwater bodies. Groundwater, drawn up from aquifers in wells or boreholes, is an important resource and is widely used

in Europe for agricultural irrigation and for domestic purposes, including drinking. There is an important distinction to be made between ‘blue water‘, stored in

surface waters and groundwater bodies, fl owing through rivers and aquifers, and ‘green water‘, which is stored in the pores of the soil, taken up in plants and released back to the atmosphere through evapotranspiration.