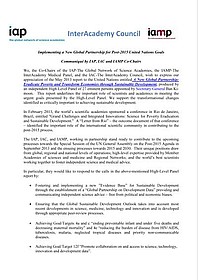 We, the Co-Chairs of the IAP-The Global Network of Science Academies, the IAMP-The InterAcademy Medical Panel, and the IAC-The InterAcademy Council, wish to express our appreciation of the May 2013 report to the United Nations entitled A New Global Partnership: Eradicate Poverty and Transform Economies through Sustainable Development, produced by an independent High-Level Panel of 27 eminent persons appointed by Secretary-General Ban Ki-moon. This report underlines the important role of scientists and academics in meeting the urgent goals presented by the High-Level Panel. We support the transformational changes identified as critically important to achieving sustainable development.