Climate targets 2030: Towards a sustainable reduction of CO2 emissions (2019) 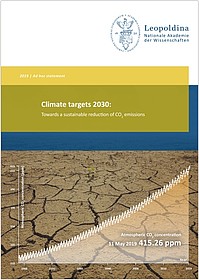 Some 30 years from now, the European Union aims to be greenhouse gas neutral and to have reduced net emissions to zero in order to limit long-term global warming to well below 2 degrees Celsius. By declaring this goal at the 2018 UN Climate Change Conference, the European Commission claimed a leading role for the EU in climate protection. Germany and the European Union have ratified the Paris Climate Convention and must play their part. In their statement of December 2018, the German National Academy of Sciences Leopoldina, the German National Academy of Science and Technology acatech and the Union of the German Academies of Sciences and Humanities recommended a pioneering alliance between Germany and other countries to introduce a transnational minimum price for CO2 emissions. A sufficiently high CO2 price in all sectors would provide a financial incentive for low-emission technologies and would constitute an important step towards a greenhouse gas neutral Europe. So far, however, it has failed due to insufficient political support.

Achieving effective climate protection affects practically all sectors and falls within the purview of responsible environmental, transport, energy and health policy. The current debate revolves primarily around the costs of climate protection measures, the costs that will arise as a result of climate change are not given due consideration. These costs are already rising today, manifesting as an increase in extreme weather conditions, droughts, crop failures and forest damage. However, future generations will bear the true brunt. School climate strikes are a stark reminder of the fact that our behaviour today affects the future of all people to a worrying degree and threatens the diversity of nature and species.

In June 2019, with this in mind, the Presidium of the National Academy of Sciences Leopoldina commissioned an interdisciplinary working group to focus on measures for compliance with the climate targets 2030 in Germany as part of its science-based policy advice. In July 2019, politicians received a series of economic reports on CO2 pricing which were also available to the working group. In September, the government will decide which measures to take to achieve the climate targets.

Climate targets 2030: Towards a sustainable reduction of CO2 emissions (PDF)