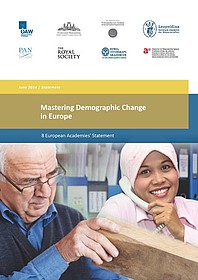 The population of Europe is changing significantly: it is growing older than it has ever before and it is ahead of other continents in that regard, in most European countries the total period fertility rate has fallen well below two children. The population in some countries has started to decline while in others migration is compensating low fertility. Thus, besides a lengthening life span and reduced child bearing, demographic change in the EU is characterized by increasing migration within Europe, and also by more immigrants from outside of Europe entering European Union member states. Such changes in the composition of the EU population, in particular when considered jointly with other global changes such as climate change or potential shortage in natural resources, pose challenges for the wellbeing of individuals, communities and societies. Against this background, environmental, economic and social sustainability have gained increasing importance for the welfare of Europe. The resources of this planet are finite, and at the same time societal institutions are in need of transformation such that they provide for longer healthy and productive lives.

Policies informed by a clear understanding of the sources and likely directions of demographic change as well as the changes in the ageing process across historical time are required to achieve these goals. As National Academies of Science, we consider it one of our tasks to contribute to well- informed policymaking. We are convinced that European citizens need the support of their EU institutions besides their national governments to plan and manage their longer lives, to maintain productivity and quality of life beyond economic employment, and to consume in a sustainable manner.

Eight European Academies of Science have assembled for this Statement pooling their knowledge on demographic change and its causes and consequences, building on scientific work as well as prior national statements of individual Academies. We seek to highlight areas and steps of priority for mastering demographic change, and we should like to contribute to creating a Europe that makes the most of its resources to the benefit of all. The following considerations and recommendations have taken into account that the European Union had identified demographic change as a priority requiring social policy change in 2006 and since then many initiatives in the areas of lifelong learning, health and labour force participation have been under way.