Opportunities for soil sustainability in Europe (2018) 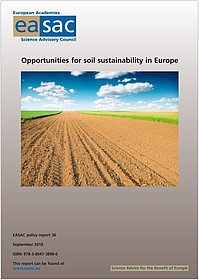 Debate on how to achieve sustainable soil management across the European Union (EU) led to the adoption of the Soil Thematic Strategy in 2006, but insufficient support among Member States obliged the European Commission to withdraw proposals for a Soils Directive in 2014. Joint actions relating to soil sustainability remain within the 7th Environment Action Programme. Internationally, however, attention to soils has been growing, recognising the importance of soils as a non-renewable resource on which we depend for several key human needs as expressed within the Sustainable Development Goals.

In view of the divergence of such trends within and outside the EU, the European Academies’ Science Advisory Council (EASAC) decided to review recent scientific understanding on the role of soils and consider implications for EU policy. The study was assisted by an expert group led by the Royal Netherlands Academy of Arts and Sciences (Koninklijke Nederlandse Akademie van Wetenschappen) and is intended to contribute to debate and decisions within the European Commission, European Council and European Parliament, as well as national governments and other stakeholders.

The increased actions on soils in the international context include the formation of the Intergovernmental Technical Panel on Soils and the Food and Agriculture Organization’s (FAO’s) Global Soil Partnership. The United Nations’ (UN’s) Sustainable Development Goals on food security, human health and terrestrial environment make explicit reference to the need to preserve soil resources. The Intergovernmental Science-Policy Platform on Biodiversity and Ecosystem Services has also addressed issues on soil sustainability.

The crucial role of soils and the threats they face are described in this report, with a focus on understanding soils’ ecosystem services, the role of soils in supporting above-ground biodiversity, maintaining sustainable soils in agriculture, linkages to healthy food and human health, and soils’ contributions to mitigating climate change.

Opportunities for soil sustainability in Europe (2018)