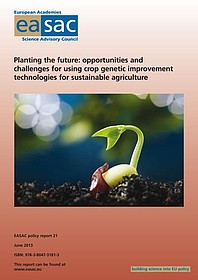 Previous European Union (EU) agricultural policy had focused on constraining food production but there is a new realisation that the EU should now increase its biomass production for food, livestock feed and other uses, including renewable materials to support the bioeconomy. The production of more food, more sustainably, requires the development of crops that can make better use of limited resources. Agricultural innovation can capitalise on the rapid pace of advance in functional genomics research and it is unwise to exclude any technology a priori for ideological reasons. Sustainable agricultural production and food security must harness the potential of biotechnology in all its facets.

In previous work, the European Academies Science Advisory Council (EASAC) has described the opportunities and challenges in using plant genetic resources in improved breeding approaches, for example by using marker-assisted selection of desired traits. In the present report, EASAC explores some of the issues associated with the genetic modification of crops, where the EU has fallen behind in its adoption of the technology, compared with many other regions of the world. Concerns have been expressed that a timeconsuming
and expensive regulatory framework in the EU, compounded by politicisation of decision-making by Member States and coupled with other policy inconsistencies, has tended to act as an impediment to agricultural innovation. Controversies about the impact of genetically modified (GM) crops have too often been based on contested science or have confounded effects of the technology with the impact of agriculture per se or changes in agronomic practice. It is vital to address the policy disconnects because there is a wide range of opportunities in prospect for improving agricultural productivity and efficiency, environmental quality and human health, by using all available technologies where appropriate.

Previous work by member academies of EASAC has documented where there is excellent, relevant science to be nurtured and used, and where problems have arisen because of the failure to use science to inform the modernisation of regulatory approaches to benefit–risk assessment. The goal of the present report is to clarify the implications for policy-makers of alternative strategic
choices in using the tools, collectively termed crop genetic improvement technologies, for delivering sustainable agriculture. Our analysis of the international evidence draws on two main work streams:

The EASAC Working Group also provided detailed evaluation of a broad range of current issues within the EU, relating to regulatory reform, consequences for the science base and new technology development (particularly, the New Breeding Techniques), public engagement, intellectual property and open innovation, increasing environmental challenges, the potential food crop pipeline and new applications for the bioeconomy. This broad review of issues revealed several serious inconsistencies in current EU policy. For example, an important objective to reduce pesticide use in agriculture is being implemented without sufficient attention paid to facilitating the development of alternative methods for protecting crops from pests and diseases. Bringing together analysis of the cross-cutting issues for the EU and the international evidence, the EASAC Working Group reached four main conclusions, with extensive implications for ascertaining greater coherence in policymaking.