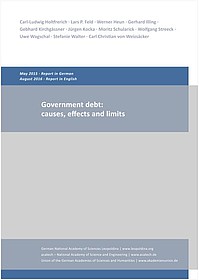 The German government debt-to-GDP ratio rose by an additional 17 percentage points following the recent financial and economic crisis; this prompted the enshrinement of the debt brake in the German constitution in 2009. Yet this has failed to quell the public debate on government debt; it is being shaped by a confluence of fears, misjudgments and one-sided assertions. This report aims to clarify misconceptions held within the general public, fill knowledge gaps and shed light on what can be confusing discussion by presenting and explaining the existing evidence in economic, political and social sciences. Though confined to the determinants, the problems and the effects of government debt in the Federal Republic of Germany, this report does not ignore international influences, interdependencies and experiences.