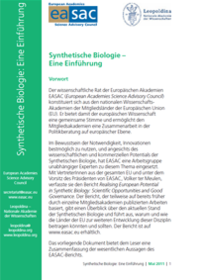 This document is a summary of the full EASAC report on Synthetic Biology. It offers readers a non-technical account of the principal content and conclusions of that report.

The advent of synthetic biology, with its aim of creating living systems out of non-living materials, is as exciting as any biological advance of recent decades, and has much to offer, socially as well as scientifically. But as some recent headlines demonstrate, it has already generated antagonistic questioning and pejorative comment. And if the volume of press coverage has so far been relatively modest, this may reflect nothing more than the infancy of the field and the consequently limited extent of the attendant publicity. The more progress that synthetic biology research makes, the more controversy it is likely to generate. Which is one reason why the authors of the EASAC report favour the establishment of a dialogue between scientists and the public on the future of the technology and its potential benefits. Such an exchange of views, based on evidence, offers the best hope of creating a context in which the public can realistically assess the fears expressed in more sensationalist accounts. This brief document is a contribution to that dialogue.