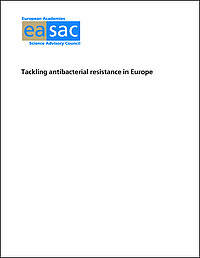 Deaths from previously treatable infections will become more common unless there is investment in the science needed to tackle antibiotic resistance the Royal Society has warned in a report published today (21 June 2007).

The report, produced by European Academies Science Advisory Council (EASAC) highlights the ever growing problem of resistance to pathogens such as MRSA, Clostridium difficile, E-coli and infectious diseases such as tuberculosis, pneumonia and meningitis.

Scientists from across Europe are calling for the EU and member states to provide greater support for the development of simple and cheap means of identifying specific infections as early as possible and greater support for drug companies who are seeking to develop new treatments. The report also urges greater awareness and monitoring of the problem, more prudent use of antibiotics, more effective containment of the spread of resistance and greater co-operation and co-ordination across Europe.