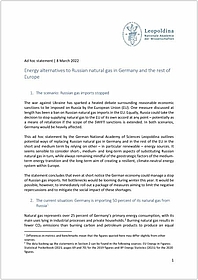 Published by the National Academy of Sciences Leopoldina

The war against Ukraine has sparked a heated debate surrounding reasonable economic sanctions to be imposed on Russia by the European Union (EU). One measure discussed at length has been a ban on Russian natural gas imports in the EU. Equally, Russia could take the decision to stop supplying natural gas to the EU of its own accord at any point – potentially as a means of retaliation if the scope of the SWIFT sanctions is extended. In both scenarios, Germany would be heavily affected.

This ad hoc statement by the German National Academy of Sciences Leopoldina outlines potential ways of replacing Russian natural gas in Germany and in the rest of the EU in the short and medium term by relying on other – in particular renewable – energy sources. It seems sensible to consider short-, medium- and long-term aspects of substituting Russian natural gas in turn, while always remaining mindful of the geostrategic factors of the medium-term energy transition and the long-term aim of creating a resilient, climate-neutral energy system within Europe.

The statement concludes that even at short notice the German economy could manage a stop of Russian gas imports. Yet bottlenecks would be looming during winter this year. It would be possible, however, to immediately roll out a package of measures aiming to limit the negative repercussions and to mitigate the social impact of these shortages.