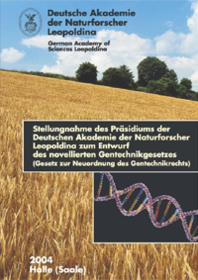 The Presidium of the German National Academy of Sciences Leopoldina issues this statement on the amendment of the directives concerning Green Genetic Engineering. The Leopoldina was also involved in joint actions spearheaded by the Deutsche Forschungsgemeinschaft (DFG) and the Max-Planck-Gesellschaft.

Recently, the German federal government proposed a draft law amending the genetic engineering law, which provided, inter alia, for the overdue harmonization of German legislation with Directive 2001/18/EC promulgated by the European Parliament and the Council as early as on 12 March 2001.

The purpose of the amendment is to create the legal framework conditions for the “deliberate release into the environment of genetically modified organisms (GMOs)” as intended by the Directive. This implies far-reaching consequences for the future development of the so-called Green genetic engineering in Germany as well as for research and industrial exploitation. The present draft law sets very high hurdles to the cultivation of genetically modified plants, which are not only restricted to the safety-relevant aspects of directive 2001/18/EC but contain further requirements that put the principle of commensurability into question.

The core of directive 2001/18/EC is that member states are called upon to ensure that “potential adverse effects on human health and the environment, which may occur directly or indirectly, through gene transfer from GMOs to other organisms, are accurately assessed.” In contrast with this, §1, no. 1 of the draft law provides: “The purpose of the act is, with consideration to ethical values, to protect human life and human health, the environment in its system of interactions, animals, plants and material goods from adverse effects of methods and products of genetic engineering and provide against the engenderment of such dangers.” The draft law instead of referring to possible, potential or contingent risks, is based upon the premise of dangerousness, which is in no way backed by the years and the global extent of the experience of cultivation and exploitation of GMOs, and therefore is scientifically dishonest.

The draft law quotes directive 2001/18/EC to demand the co-existence of conventional, ecological and genetically modified forms of cultivation in agriculture and to ensure the marketing of the products so obtained (§1, no. 2). This paragraph would be welcome, on principle. In fact, however, what is missed is that the following articles extend the same form of treatment of different forms of cultivation. However, reference is merely made to three major points. The field cultivation of GMOs and the use of products obtained therefrom is linked to an exceedingly high number of bureaucratic requirements (cf. §16). Lopsided liability provisions are stipulated which are more far-reaching than before and can hardly be met, at least when looked at from the research aspect (cf. §32). The approval procedure involves numerous authorities, such as several authorities at state and federal levels, e.g., the consent of the Federal Office for Ecology (cf. §16, clause 4). The proven and efficient approach practiced by the experts on the Central Committee for Biological Safety (ZKBS) is given up in favor of two new committees, one for genetic engineering tasks in genetic engineering plants, the other for release and marketing (cf. §5). This new division of duties presupposes that, in future, applicants will have to tailor their research projects to which of these bodies happens to be responsible. Typical of the second committee is that while every other of its members should be “a competent person”, no specialized genetic knowledge is required of them. Under this constellation, it can be expected that any future approval procedure will be subject to criteria unrelated to the field and it will become more difficult to obtain approval and only at a loss of time. All in all, the draft law is not an example of the facilitation expected by all involved.

The proposed new legislation will equally adversely effect German science and the transfer of know-how in the field of application – industry and agriculture. Necessary research in Green genetic engineering, that is forging ahead with immense intellectual and financial investment in all industrialized countries of the world, is obstructed or prevented. The opportunities held out by this research discipline, e.g., a reduction of the input of toxic substances in the ecosystem or an increase in the efficiency of agricultural production, are not only not actively taken up but wasted by blocking progress.

In consideration of its national and international reputation, the German Academy of Sciences Leopoldina, for centuries guided by its motto of exploring nature for the benefit of the human being, can only deplore such ordinances obstructing all research, knowledge and application. The version of the genetic engineering law proposed now does in no way live up to the “innovation” guidelines proclaimed by the federal government in January this year. It curtails the national opportunities of a technology with a high innovation potential that is already used by seven million farmers in about 20 countries.

To avert the obvious disadvantages accruing to Germany’s science, agriculture and industry, it is essential in the opinion of Leopoldina to integrate in the federal government’s draft law the opinion advanced by experts backed by scientific findings and modify the draft accordingly. What has been possible applying the rules of Red genetic engineering so successfully in the field of medicine should also be possible for Green genetic engineering that is not less important.