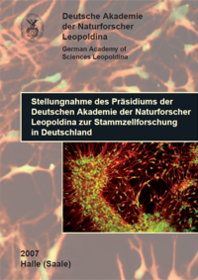 The legislation governed by the Act for the Protection of Embryos in Connection with the Importation and Utilization of Human Embryonic Stem Cells (Stem Cell Act – StZG) came into force on 1 July 2002. This act supplements the Embryo Protection Act (ESchG) of 13 December 1990.

The legislation governed by the Act for the Protection of Embryos in Connection with the Importation and Utilization of Human Embryonic Stem Cells (Stem Cell Act – StZG) came into force on 1 July 2002. This act supplements the Embryo Protection Act (ESchG) of 13 December 1990.

These acts stipulate, as described below, the following legal situation for Germany:

2. Research with hES cells is also prohibited both in academic and in commercial settings in Germany, with the exception of cell lines that were derived abroad prior to 1 January 2002, the so-called key date, from surplus embryos produced by invitro fertilisation. This applies, for example, to hES cell lines listed in the National Institute of Health Register (NIH lines).

3. Scientists who intend to work with hES cells in Germany have to submit their research project to the Robert Koch Institute (RKI) and plausibly explain that the planned work is of high priority and that the findings cannot be obtained otherwise (e.g. with alternative cell systems).

4. The utilisation of hES cells is restricted to research (Section 5 StZG). Their use for diagnostic, therapeutic and preventive purposes is forbidden. This prohibition also includes the treatment of terminally ill patients preceding clinical trials.

5. Any contravention of the StZG is punished under penal law and may incur up to three years of imprisonment (Section 13 StZG).

After five years of experience with the StZG the German Academy of Sciences Leopoldina deems it appropriate to publish a statement on the implications of the Act on previous and future stem cell research in Germany and to comment on the anticipated consequences of the Act for the potential economic exploitation of this technology. This statement is made against the background of publications by the Berlin-Brandenburg Academy of Sciences (BBAW) and a statement by the German Research Foundation (DFG) from October 2006.

The BBAW publications and the DFG statement emphasise the dynamic nature of scientific progress in the field of stem cell research, which has been predominantly achieved abroad since the StZG came into force. Ethical considerations are brought up to date and examples are given to show the legal uncertainty and consequences for German scientists of the legal constraints imposed by the Act. The Leopoldina makes a point of supporting the recommendations put forward in the DFG statement and, in view of further recent publications, strongly recommends amendment of the Stem Cell Act in three instances.