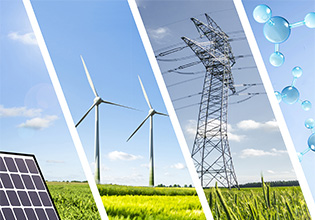 With the European Green Deal, the European Union has set itself the goal of operating carbon-neutral by 2050. An important element of this commitment is an energy transition away from the use of fossil energy carriers towards the generation and use of renewable energies. In the current energy system, greenhouse gas emissions are the largest driving factor of climate change. For the energy transition to succeed, “no-regret” measures, the introduction of a standard cross-sector CO₂ price, including a minimum price, and comprehensive changes to the infrastructure are necessary.

Effective climate protection helps to guarantee the foundation of life in Germany, Europe, and the world. The consequences of human-made climate change are already affecting increasing numbers of people and ecosystems in the form of extreme weather events such as droughts and hurricanes, forest fires, the accelerating rise in sea levels, and melting ice sheets. The indirect consequences of increasing climate change include the loss of habitable territory and biodiversity as well as more human migration.

Without a rapid mitigation effort to reduce greenhouse gas emissions and limit global warming to below 2°C, the risk of climate change reaching uncontrollable levels will increase. Early and rapidly increasing investments in climate protection – especially in transforming the energy system – can pave the way for a carbon-neutral society.

The challenges of climate protection policy must be considered against the background of the current crisis caused by the coronavirus pandemic. It will be crucial for climate protection that all funds mobilised to tackle the crisis are invested in accordance with the achievement of the Paris Climate Agreement’s objectives. The goal is to identify political, technological, and regulatory measures which, when implemented jointly, will enable an energy transition without overburdening the economy and society. The complete transformation of energy systems with the aim of greenhouse gas neutrality by the middle of the century would set European climate policy on a new path.

In 2050, the EU aims to be a carbon-neutral, resource-efficient union which is nevertheless economically competitive. The energy transition forms the basis for this transformation. It is a task which requires major innovation and investment in infrastructure and industrial equipment. Investment periods in the areas of energy and industry often span 30 to 50 years. What is built today will still be in use in 2050.

On the political level, a coherent strategy must be developed and joint action agreed upon to achieve a European energy transition. On the technological level, the aim is to introduce new technologies at the necessary scale and to combine them systematically. On the regulatory level, it is necessary to create effective and cost-efficient incentive systems.

The only way to achieve the EU’s climate protection targets is via a joint climate and energy strategy, which emphasises collective action based on solidarity and long-term objectives. This requires agreements rooted in trust and decision-making processes which are fully transparent, favoring a shared approach, and considering the member states’ different preconditions.

CO₂ price and changes in infrastructure

Publications about the topic

Energy Systems of the Future (ESYS)