Decarbonisation of transport: options and challenges (2019) 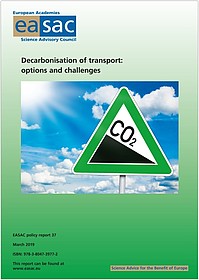 The gap between the GHG emissions projected in the EU Reference Scenario 2016 and the level of emissions needed to limit global warming to less than 2°C or even further to 1.5°C (Paris Agreement) is huge. The EU has already adopted a strategy for low-emission mobility to promote the decarbonisation of transport and has strengthened the EU Emission Trading System (ETS) by increasing the pace of annual reductions in allowances and adding a market stability reserve. The ETS does not directly address the transport sector, but doing so will become increasingly important as transport is electrified. The EU has also committed a growing fraction of its future budget to investments in infrastructure, and to research and innovation for a more sustainable economy.

Nevertheless, much more needs to be done to deliver the target set in the European Commission’s White Paper on transport of 2011 to reduce emissions from the transport sector by 60% by 2050 (compared with 1990 levels) and to ensure that EU emissions are firmly on the way to zero by that date.

EASAC has developed advice for policy-makers by building on the initiatives that the EU has already taken to tackle transport emissions, and by prioritising policy options that could be adopted at EU, national and local levels both during the transition to low-carbon transport and in the long term.