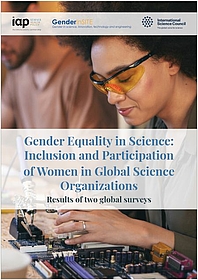 This study reports on the results of surveys conducted amongst academies that are members of the InterAcademy Partnership (IAP) and the International Science Council (ISC), as well as amongst international disciplinary unions and associations that are members of the ISC, to ascertain the inclusion and participation of women scientists. The study was coordinated by GenderInSITE (Gender in Science, Innovation, Technology and Engineering), in collaboration with the IAP and ISC. It is a follow-up to a first global survey of science academies conducted in 2015 and funded by the IAP. A key objective of the current study was to ascertain the extent to which progress in gender equality has been made by academies. What makes the present study unique is its broadened focus to include medical academies that became members of the IAP after 2015 and national young academies, as well as ISC-member academies, mainly drawn from the social sciences. In addition, the international disciplinary unions and associations of the ISC were also surveyed, given their potential to play an important role in leading gender transformation in specific disciplines.

Respectively, 85 and 38 valid submissions were received from the academies and the disciplinary unions and associations.

The individual science institutions surveyed, be they academies, disciplinary unions or associations, through their membership of international bodies such as the IAP and ISC, represent a large proportion of global scientific endeavour. In total, they represent over 250 unique organizations that are coordinated at a global level. The survey results therefore provide important baseline information for a transformative action agenda for gender equality in global science.